I have been writing this blog for many years although I have fallen off in the number of posts in the past several years because we no longer own our cabin on the St. Marys River.  It has been painful to post about shipping because I miss the cabin so much.

However, I still follow shipping closely.  The use of technology allows me to see what boats are in 'the system'.

I use an app called MarineTraffic.  They call themselves the "World's #1 ship tracking app!"

I have found it to be accurate and time sensitive.  It's capabilities are much greater than I need.  It covers world-wide shipping.  But that came in handy recently when I was visiting Tampa, Florida and saw a ship in the harbor.  I was able to identify it using the app.

What apps do you use to help inn enjoying Great Lakes Shipping?  I'd love to hear from you.

Posted by Sault Boat Watcher at 9:28 AM No comments: 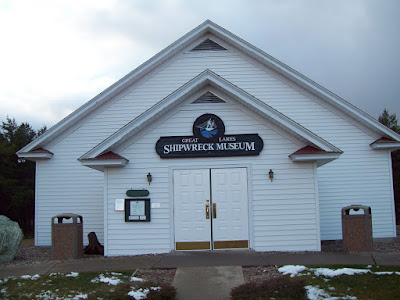 On November 10, 2008, my husband I had an opportunity to attend the Edmund Fitzgerald Memorial Service at the Great Lakes Shipwreck Museum at Whitefish Point, Michigan. It was a moving and educational experience.

The program stated:November 10, 1975, the Fitzgerald and her entire crew of 29 men were lost in one of the worst storms in three decades. No one knows why a 729-foot ore carrier could founder so suddenly and mysteriously. The Fitz lies just 17 miles north-northwest of Whitefish Point in 535 feet of water."

We arrived at Whitefish Point in the mid-afternoon so we could take some photos in good light. It was a blustery, cold day.

We went down to the beach on the walkway and saw two boats heading out into the lake.
I recently read The Living Great Lakes by Jerry Dennis. It is a great book for learning about the Great Lakes and their history, biology, geology through Dennis' love for the Lakes. In the book, he describes this time of year on Lake Superior.

This November 10 was windy & damp; cold but not dangerous to shipping. When we arrived there was a rainbow right over this boat but it doesn't show up in the photo. 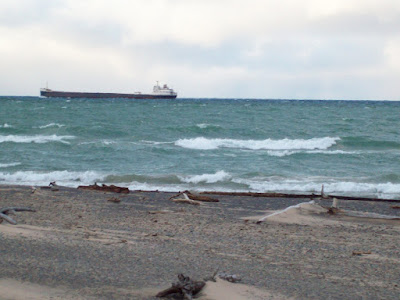 After taking pictures, we drove into Paradise for dinner. The Berry Patch stayed open late to serve the visitors for the Fitzgerald ceremony. I enjoyed a great pastie in this small restaurant and bakery.

When we returned to Whitefish Point, it was dark and the beacon from the lighthouse was showing bright. 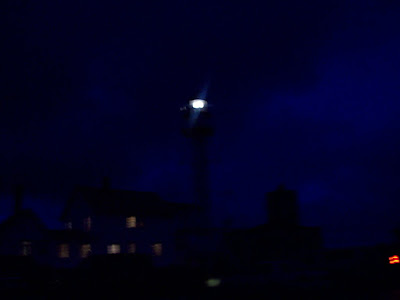 I took this video in the afternoon. You can here the howling wind and the fog horn sounding!


Posted by Sault Boat Watcher at 7:01 AM No comments:

When the winds died down 40 ships had been sunk resulting in the loss of 235 seamen. 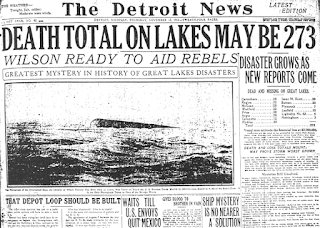 The following two pictures were taken on November 9, 2008.  The St. Marys River pic was from near the Soo.  The photo of me getting blown away is from Whitefish Point later that day.  I was there getting ready for tomorrow's big anniversary-the loss of the Edmund Fitzgerald.  More about that tomorrow. 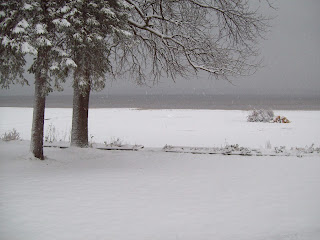 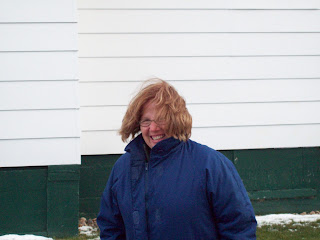 Posted by Sault Boat Watcher at 10:32 AM No comments:


Today is an important day in the United States as we elect a new president.  This has been a hard-fought battle between Trump and Clinton.  Most people seem glad that the campaigning is now over.

But November 8 has been an important day in Michigan's history of elections.

It was November 8, 1836 when Michigan citizens were first able to vote for president.  Michigan became a state officially on January 26, 1837, however the citizens were allowed to take part in the 1836 Presidential election.

Martin Van Buren won the election in part thanks to the vote of Michigan.  He had been the Vice-President under Andrew Jackson. 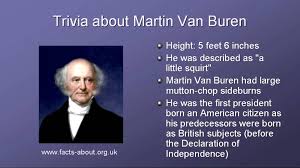 November 8, 1870 is also an important day in Michigan history because it is the first time that blacks were allowed to vote in a Michigan election.  The right to vote or suffrage was guaranteed to African-Americans by the 15th Amendment to the US Constitution.  Of course, this was the right to vote for black males.  No females of any race were allowed to vote until 1920.

I recently visited Seneca Falls,  New York where the first convention on women's rights was held.  The convention issued a Declaration of Sentiments calling for rights of women to be increased including the right to vote.

The idea that women should be given the right to vote was a matter of contention at this convention.  Frederick Douglass, the African-American social reformer, urged the women to include the right to vote on the convention's Declaration of Sentiments.
Posted by Sault Boat Watcher at 12:00 AM No comments:

Fall in the Sault

The colors this week have been stunning.  After a late start for the changing leaves, we have been treated to the best of autumn's color spectacular.

If you travel west from the Sault past Brimley, Mission Hill Overlook offers some of the most beautiful views of Lake Superior.  The lake in the foreground are Spectacle Lake. 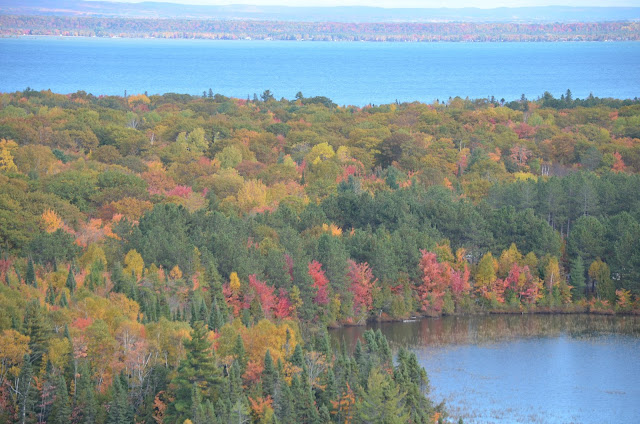 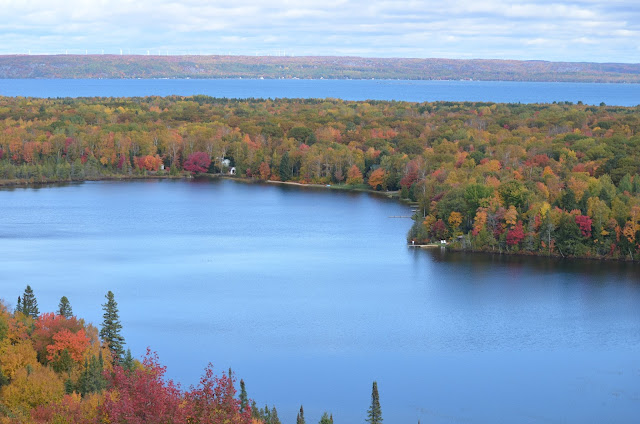 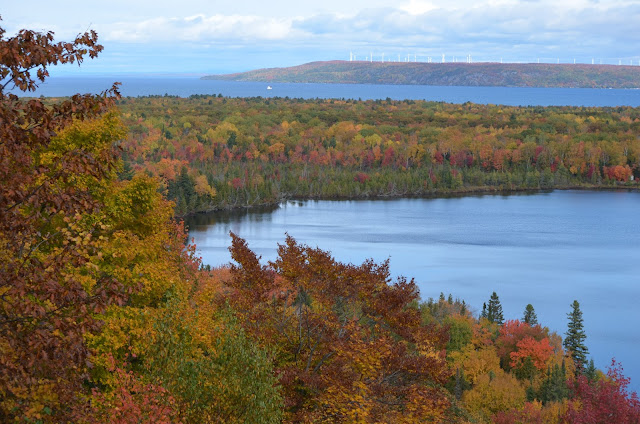 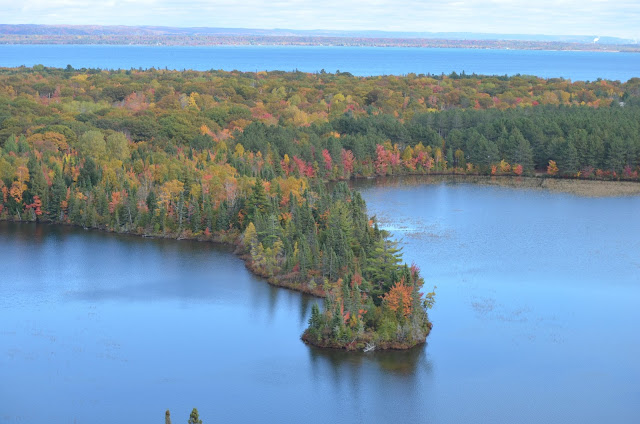 Follow the road to the overlook and it becomes gravel.  We enjoyed the tunnel effect of the trees that covered the road like a pergola. 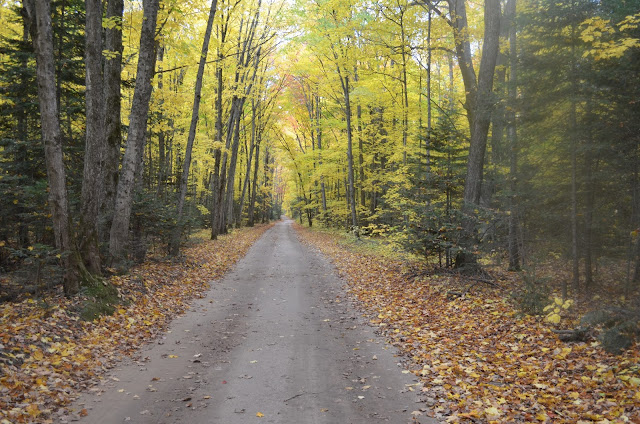 Of course, if I head out to Brimley, I always want to stop at Dancing Crane, the local coffee shop.  Dancing Crane is unlike most other coffee shops except that it serves wonderful lattes. 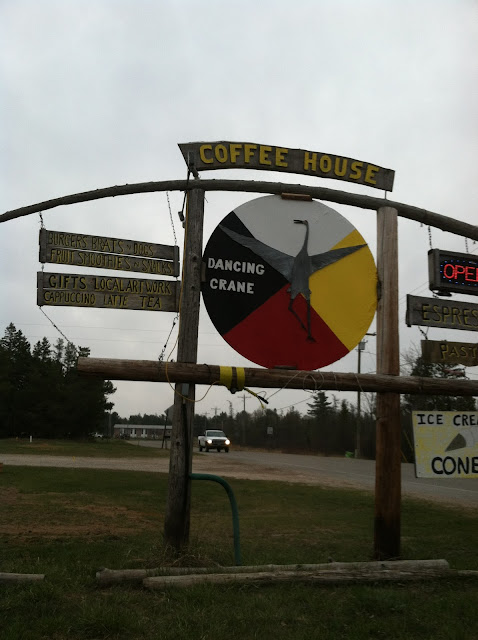 Where have you been seeing great fall colors?  In Michigan?  Or other states?
Posted by Sault Boat Watcher at 8:35 PM 2 comments:

Boat watching for 2015 is starting to gear up with the warm April weather helping melt the ice pack of the Lakes.  What is your favorite boat to watch?   A beauty or a tried and true work horse?

My grandfather started me on my boatwatching hobby early in my life.  Our cabin on the St. Marys River gave us the perfect viewing spot at a time when there were many more boats passing every day.


Wilfred Sykes  was Pa's favorite.  Boatnerd.com tell the following information on her. (Plus much more if you follow the link.)  She was build by American Shipbuilding Co in Ohio in 1949 for Inland Steel Co.  "The steamlined bulk frieghter was the first new American-built Great Lakes vessel constructed after World War II.  At the time of her launch, she was the largest vessel on the Great Lakes."

My favorite app for boatwatching is Marine Traffic.  It lists 1950 as the year the Sykes was launched.  That makes her 65 years old and especially fun for me because I was born that year too.

The Sykes is still active and is hauling limestone and sand from the Cedarville area. Right now she is on her way to Escanaba, Michigan.

The Edward L. Ryerson is a sister ship to the Sykes. The Ryerson was launched in 1960.

I took the following pictures of the Ryerson passing the Presque Isle from our cabin on the St. Marys River south of Sault Ste. Marie. 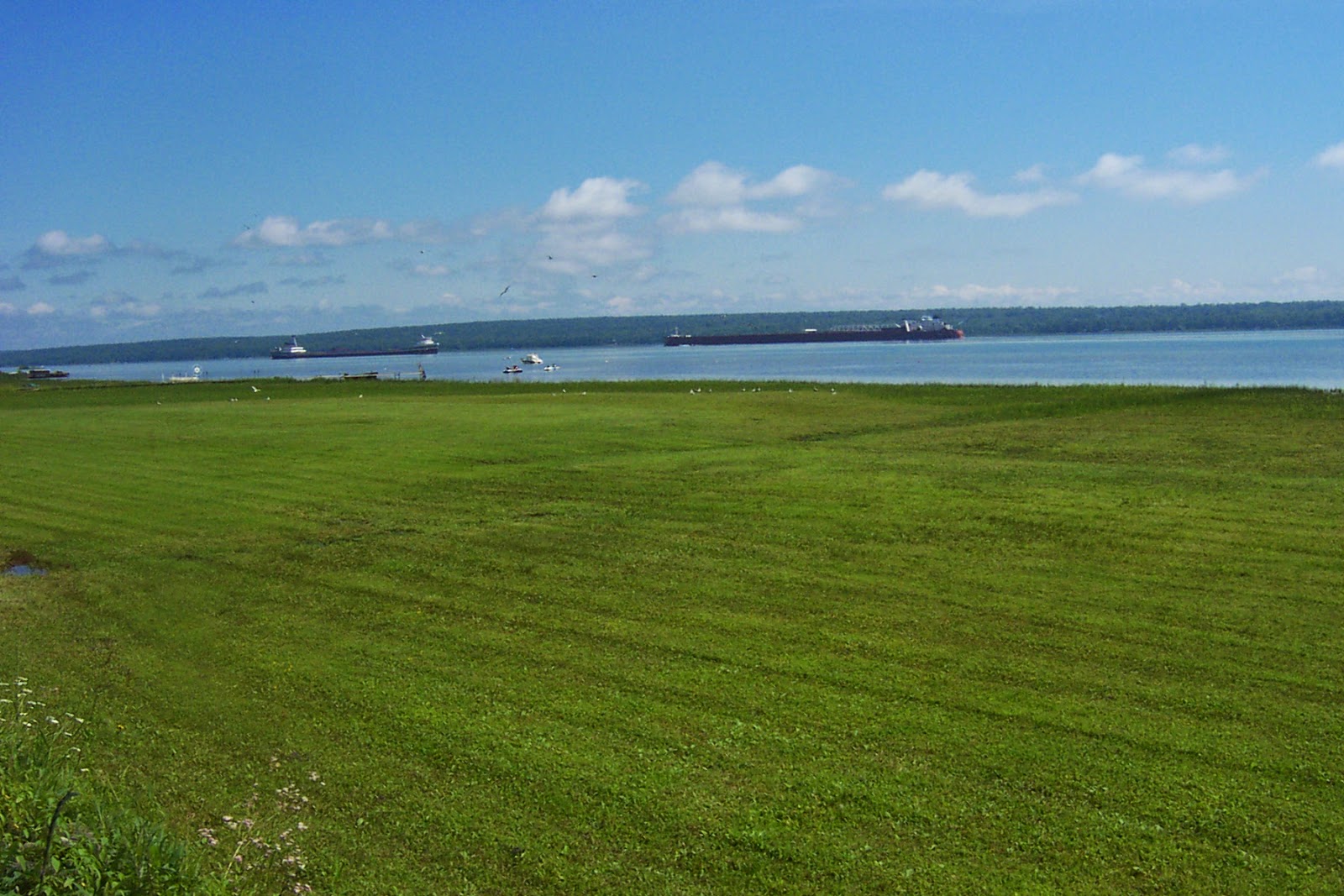 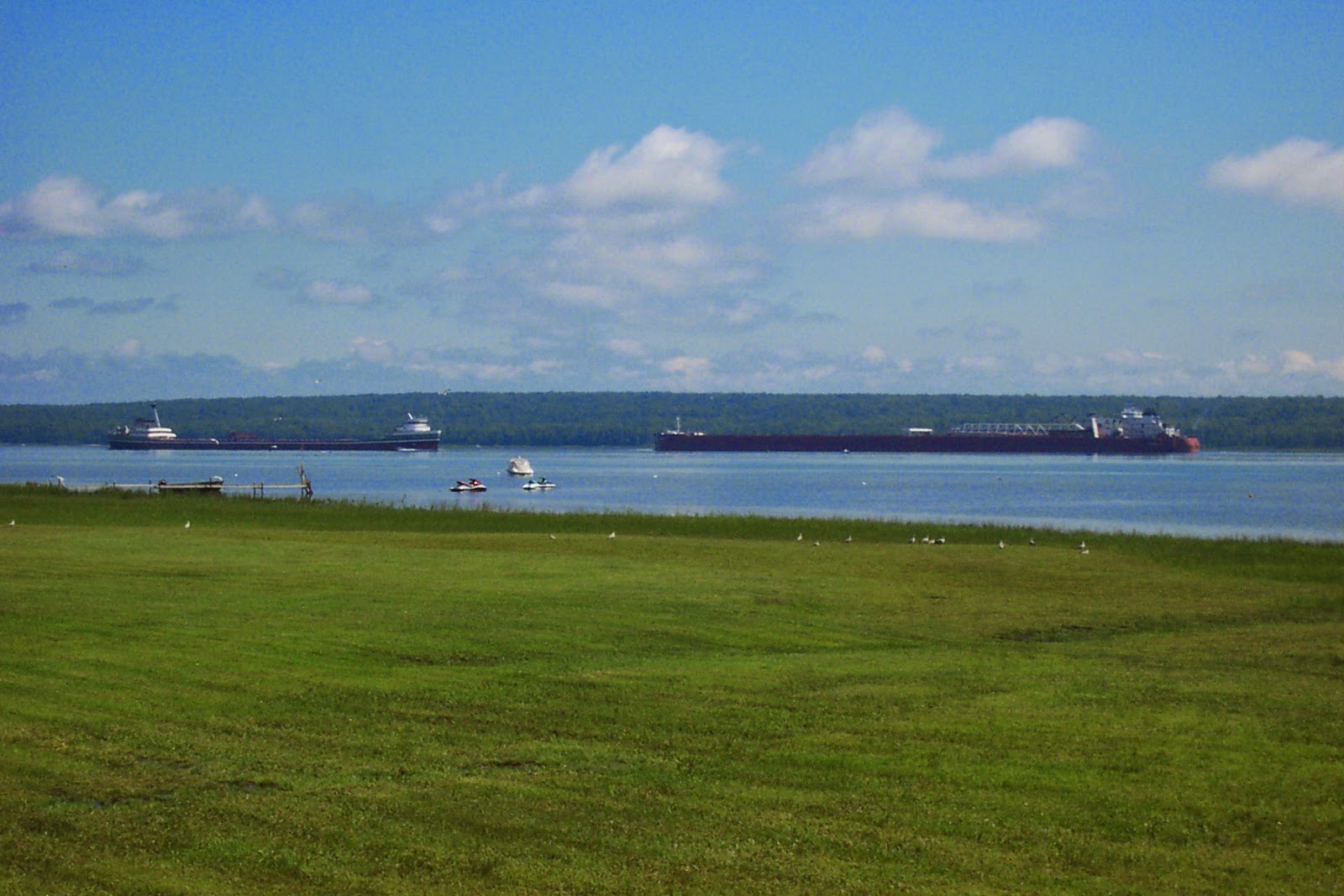 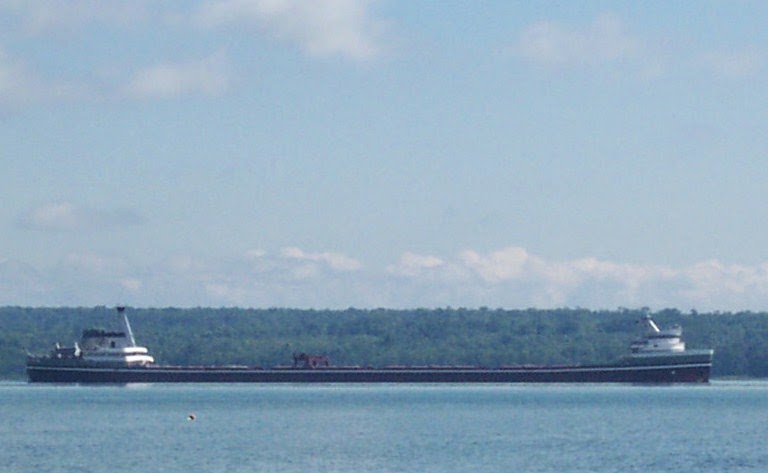 What is your favorite boat on the Great Lakes?  Is it the Ryerson or the Sykes or another boat I haven't mentioned? Tell me at saultboatwatcher@gmail.com.


Posted by Sault Boat Watcher at 2:39 PM No comments: 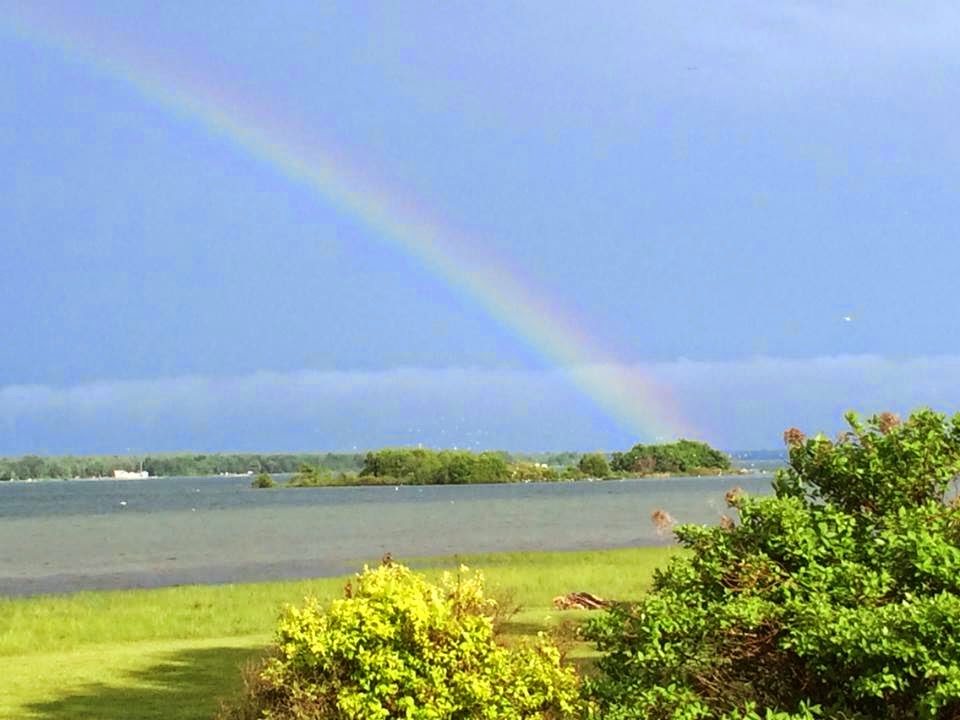 Does life aboard a ship sailing the Great Lakes appeal to you?  Long, quiet days filled with beautiful scenery and no daily hassles of traffic, noisy neighbors and barking dogs.


A recent survey has concluded that most sailors are content with their lives on the water.  The gCaptain story tells of an recent survey given to those in the shipping industry.

The majority of respondents to the survey said they are content with their life at sea.


The sailors indicated two things have greatly improved their live on board their ships in the past two years.

This survey was given world-wide to sailors from over 40 countries.  I would like to conduct an informal survey of Great Lakes sailors.

Are you happy with your life on-board your freighter?


We'd like to hear from you through email and also by completing this survey.

I'd love to hear from you. What do you love about Michigan?